The Red Centre, and The Hatching of a Plan

For our first proper holiday since we started working in Oz, we flew to Alice Springs and went on a road trip to Ayers Rock (Uluru to the politically correct) and Kings Canyon.

This country is big. Like, really really big. We’ve covered around 1500 kilometres in a week – more than enough to get you from London to Italy. Covering this distance in Europe would be a nightmare, full of turnings, roundabouts and suicidal Gallic teenagers on mopeds. In the outback it can actually be relaxing. The directions from Alice Springs to Ayers Rock are literally “Head south, take the first major right turn in 200 kilometres, continue another 250 kilometres, and be sure to wave if you see any cars”. You mostly have the road to yourself – just hours of gunbarrel-straight highways, music from the iPod and gradually changing geology. And roadkill. And bushfires.

Here are some photos from the trip, confirming among other things that the roads are straight, that the sand is red, and that melons grow out of the ground by the roadside:

So there’s been a silly idea brewing in my head for a while now, and over this last week I think I’ve finally convinced Jude that it’s worth doing. We’re going to drive around Australia. Probably anticlockwise. 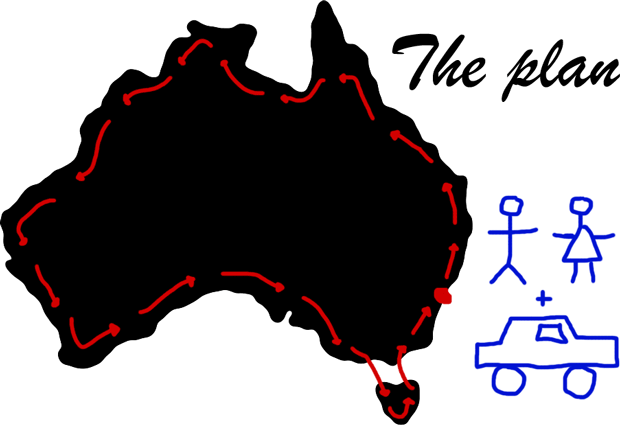 I wish I had an oversize tabletop map, some wooden figurines and a long stick to push them around with; but Photoshop will have to do.

This will be quite an undertaking. Taking into account detours to see sights, it’ll be at least 20,000 kilometres. We’ll need a 4×4 car since much of our time will be spent on tracks and unsealed roads. And a tent, and a cooker, and some camp furniture, and a lot of maps, and a satellite phone, and books, and a fridge to keep the beer cold, and a toolkit, and cooking gear, and probably a lot of stuff I haven’t thought of yet.

It’s going to be epic. I’ll keep you posted about the more interesting aspects of preparation, and try to gloss over the fridge research. Watch this space.

3 Responses to The Red Centre, and The Hatching of a Plan